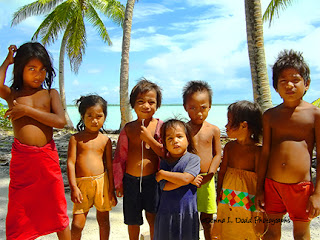 I'm showing this image at Lakeside Cafe...part of the 81Bees Travel Photography Show.  I took this with a nothing fancy point & shoot camera...but I love it so much that I decided to show it.

This was taken on Fanning Island, part of the Republic of Kiribati...and it's not really an island at all...it's an atoll.  I traveled to this untouched world a few years ago with a girlfriend.  We had rented bikes and were riding along the only, very deeply potholed, mud and dirt road that followed the little strip of land surrounding the lagoon.  As we passed a clearing with a few grass covered huts built on stilts we heard children shouting, "Hello!, Hello!" and as we looked back we saw these kids racing after us.  Of course we stopped!

"Hello" appeared to be the only English they knew so I held up my camera and the boy on the left, obviously the leader, lined everyone up for me.  The first shot I took they were all very stiff and just stared right at the camera.  I held my index finger up to indicate I wanted to take one more shot.  Also, by this time the little girl on the left in the yellow shorts had caught up.  For some reason I think the leader of the pack became a little apprehensive about me taking one more photo...but that became the "keeper."  After looking at the heights of the children and the colors they were wearing, I don't think I could have lined them up any better myself!

I would love to go back some day and see what has become of this little piece of, until recently anyway, forgotten part of the world.  It still is one of my top favorite places I've visited.
Posted by DonnaD at 5:11 PM