If you're on facebook you might have seen Nina Katchadourian's airplane lavatory photos.  An article on laughingsquid.com says, "To pass the time during long flights, artist Nina Katchadourian goes to the lavatory, adorns herself in tissue paper costume, and creates hilarious self-portrait photos in the style of Flemish Renaissance paintings. She calls the series “Seat Assignment: Lavatory Self-Portraits in the Flemish Style.”

She used items found in the labratory (toilet seat covers, toilet paper, etc.), a few items she brought on board (sweaters, inflatable neck pillow) and a cell phone camera to create her brilliant images.  If you're lucky and you live in the bay area, or can travel here before May 26, 2012 you can see these images at the Catherine Clark Gallery at 150 Minna St., which is the alley street between Mission and Howard streets.

Making pretty images is fun (which is, hopefully, what I do)...but it sure would be great to come up with a clever idea like this.  After all, it really is the idea...that's the ticket.  And, of course, the wherewithal to execute it.

But when you look at her images they work not only because of her clever use of ordinary items to create her costumes, but the fact that she has the perfect profile for the "flemish style," small delicate features, thin but prominent nose, long face, dark hair...that's what helps make these images work. 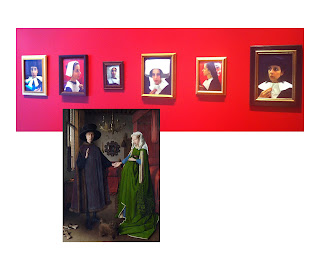 Here, let me show you.  The bottom image is the famous flemish painting by Jan van Eyck, The Arnolfine portrait, the top images are just a few of Nina Katchadourian's that are being shown at the Gallery.  It's hard to see from my small thumbnails...but the facial similarities are there.  Her idea is just too darn clever, her execution and perfect profile makes it happen!

Oh, and she's also showing two videos where she's dressed in her costumes and lip singing to hard rock songs.  I forgot to write down the names of the songs...and I can't remember them now but that doesn't really matter.  It's fun to watch.  I just hope no one was hopping up and down outside the lavatory while she was rock'in out!
Posted by DonnaD at 9:11 PM